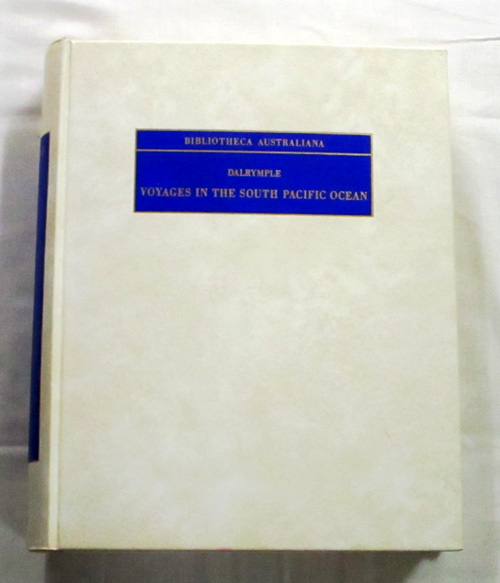 Small Quarto Size [approx 17.5cm x 24cm]. Very Good+ condition. Minor stain to the very bottom edge of boards. Bound in cream faux vellum with blue/gilt title patches to face and spine. Bibliotheca Australiana #11. Four [4] fold-out maps. Eleven [11] Black & white illustrations [four fold-out]. xxx, 204, 124, 20 pages + 60 pages Alexander Dalrymple was a Scottish geographer and the first Hydrographer of the British Admiralty. He was the main proponent of the theory that there existed a vast undiscovered continent in the South Pacific - Terra Australis Incognita. He produced thousands of nautical charts, mapping a remarkable number of seas and oceans for the first time, and contributing significantly to the safety of shipping. Whilst translating some Spanish documents captured in the Philippines in 1752, Dalrymple had found Luis VÃ¡ez de Torres' testimony proving a passage south of New Guinea now known as Torres Strait. This discovery led Dalrymple to publish the "Historical Collection of the Several Voyages and Discoveries in the South Pacific Ocean" in 1770-1771, which aroused widespread interest in his claim of the existence of an unknown continent. Meanwhile James Cook had been appointed in his place to lead an expedition to the South Pacific which in 1770 discovered the east coast of Australia. Robust, professional packaging and tracking provided for all parcels.

Title: A Historical Collection of the Several Voyages and Discoveries in the South Pacific Ocean [Two Volumes in One ]